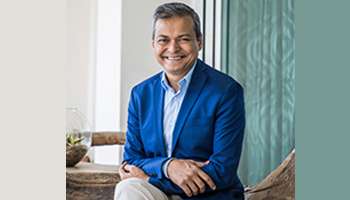 Lalit Agarwal is a retail entrepreneur, and founded V-Mart in 2002, pioneering the concept of organized value retailing focusing on affordable fashion, in Tier II, III and IV Indian cities. He was awarded by Indian Retail (Franchise India) for ‘Retail Leader of the Year in 2018’ and, in July 2017, was nominated to the Niti Aayog’ Champions of Change initiative.

In Lalit’s stewardship, V-Mart has won many prestigious awards. The company was chosen as “The world’s best-performing departmental store chain” by Bloomberg in 2018, “The Best operating model in India” by Jefferies Research, Indian Power Brand- 2012-2013 by Planman Media; “Most Admired Retailer of the Year”:- “Discount Retail” by Images Retail Award 2011. V-Mart has also won the “Most Admired Retailer of the Year”:- “Concept Store” by India Retail Forum 2011. It is one of the trusted retailers awarded by International Brand Consulting Corporation, USA as India’s No. 1 Brand Awards 2016: India’s Best Retail Fashion Store Chain Category.

As a leading industry voice, Lalit holds the role of the Chairman of Retailers Association of India (RAI) for the Northern Region. Lalit earned a Bachelor’s Degree in Commerce from Bombay University, and Diploma in Financial Management from Narsee Monjee Institute of Management Studies (NMIMS), Mumbai.

Lalit also writes a weekly blog on the dynamics and interplay of Leadership, Culture and Technology.