You are here: Home1 / Kiran Bedi 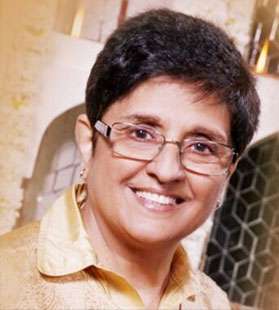 Kiran Bedi has been India’s first and highest (woman) ranking officer who joined the Indian Police Service in 1972. Her expertise includes more than 35 years of creative and reformative policing and prison management. She worked with the United Nations in New York as the Police Advisor to the Secretary General, in the Department of Peace Keeping Operations. She represented India in International forums on crime prevention, drug abuse, police and prison reforms and women’s issues.

She holds a Law, Masters, Doctorate degree. She is also a Nehru Fellow (post doctoral) — Been a National and an Asian Tennis champion. She has addressed audiences at the American, British, European, Indian Universities, Corporate and Civil Society groups.

She is a recipient of the prestigious Ramon Magsaysay Award (also called the Asian Nobel Prize), and several other national and international decorations, Dr. Bedi is an author of many books, has her biography I Dare, anchors radio and television shows and is a columnist with leading newspapers and magazines. She is the founder of two NGOs, Navjyoti and India Vision Foundation, which reach out to thousands of under -served children, women and men in the areas of education, vocational skills, environment, counseling, and health care to the urban and rural poor. Currently her NGOs are running four Community Colleges, registered with Indira Gandhi National Open University, to provide vocational and soft skills to Indian youth. Kiran Bedi has been voted as India’s most admired (THE WEEK 2002) and most trusted woman in India. (Readers Digest, March 2010) A nonfiction feature film on Dr Bedi’s life entitled Yes, Madam Sir has been produced by an Australian film maker, Megan Doneman. The film was adjudged the “Best Documentary” at Santa Barbara International Film Festival. It has been receiving standing ovation in most of its screenings around the world.

Currently, she has been in the vanguard of a nationwide, India Against Corruption, a movement led by Shri Anna Hazare which compelled the Indian Parliament to pass a unanimous resolution accepting three key demands of Janlokpal Bill, drafted by Team Anna . For more information on her please visit her website www.kiranbedi.org or www.kiranbedi.org