Yogi, Mystic & Founder of Isha Foundation Sadhguru’s inclusive vision for human wellbeing, spurred him to establish the Isha Foundation, a public service organization. Started 30 years ago and run by over 2 million volunteers today, Isha has grown from its grassroots origins in southern India to a global presence with centers in over 150 cities worldwide. Through life-transforming yoga programs and meticulously crafted social, health, and environmental initiatives, Sadhguru’s widespread impact earned him a place among India’s 50 Most Influential People (India Today, 2011). Sadhguru’s mastery of the yogic sciences enables him to customize methods offered in Isha Yoga programs for each individual who participates, with the aim to make life effortless and joyful. Research studies done on practitioners of Inner Engineering; Isha’s flagship yoga program, have shown significant health benefits including relief from chronic ailments like asthma, blood pressure, and diabetes. In addition, studies suggest that participants have enhanced capabilities in learning, creativity and intellectual sharpness. Managing Director, Britannia Industries Limited
Varun Berry assumed office as Managing Director of Britannia Industries on 1 April 2014. He joined Britannia from PepsiCo and came with 27+ years of work experience with premier companies such as Hindustan Unilever and PepsiCo, both in India and overseas and a successful track record of leading startups, turnarounds, joint ventures and growth businesses. His prior assignment with Pepsi was as CEO of PepsiCo Foods, South Asia.
Varun is on the board of 14 other companies. He holds a graduate degree in BE Mechanical as well as an MBA degree from Punjab University. He has also attended a course in Strategic Management from Wharton University and the Global Leadership Program at IMD, Switzerland. Co‑Founder, iSPIRT Foundation
Sharad is a passionate evangelist for developing technology product businesses and nurturing the supporting ecosystem in India. He is part of the Governing Council and Co-Founder of iSPIRT (Indian Software Product Industry RoundTable) Foundation, a non-profit technology think tank devoted to making India a product nation. iSPIRT builds four types of public goods — technology building blocks (aka India Stack), startup-friendly policies and market access programs such as M&A Connect and Playbooks that codify scarce tacit knowledge for product entrepreneurs of India.
Sharad has three decades of experience in the internet, enterprise software, and digital infrastructure markets and is a prominent voice in India’s technology ecosystem. His personal mantra is to lead big and small companies through orbit change. Previously, he was the CEO of Yahoo! India R&D and was responsible for emerging markets engineering and several key global products. Sharad also co-founded Teltier Technologies Inc., a wireless infrastructure startup, now part of CISCO, and is an active technology angel investor with over two dozen investments. In addition, he was instrumental in the success of India’s first IP focussed fund, India Innovation Fund.
Sharad has held several senior R&D executive positions with leading technology companies, including VERITAS Software, Symantec, Lucent Technologies, and AT&T. Zinnov felicitated him with the R&D Visionary Award in 2008 for his work on creating a strong MNC R&D footprint in India. Earlier, he chaired NASSCOM Product Forum in its formative years and was a Member of the NASSCOM Executive Council from 2009 to 2013.
Sharad is a Member of SEBI’s Financial and Regulatory Technology Committee. He has also served on RBI’s UK Sinha MSME Committee and National Digital Payments Committee. He got interested in kernel software development while doing his Electrical Engineering at Delhi College of Engineering. He started India’s first Student Minicomputer Club in 1984 and served as the Chairperson of the IEEE Student Chapter. 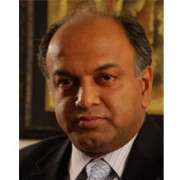 Founder and Executive Vice Chairman, Info Edge
Sanjeev Bikhchandani is the Founder of Info Edge India Ltd. – the company that owns Naukri.com, India’s leading job site. It also owns 99acres.com, Jeevansathi.com and Shiksha.com. In addition it has invested in promising internet start-ups such as Zomato, Policybazaar, Shopkirana, Ustraa, Gramophone, Shipsy, and Printo, among others.

Sanjeev schooled at St. Columba’s School in New Delhi. He graduated in Economics from St. Stephen’s College, Delhi University and began his career working in advertising with Lintas. After working for three years he did his post-graduation from IIM Ahmedabad in 1989 and joined the consumer marketing firm HMM Ltd.(now called Glaxo SmithKline Consumer Healthcare Ltd.). He quit his job for entrepreneurship eighteen months later and co-founded Info Edge.

For the first seven years as an entrepreneur, Sanjeev drifted and did a number of small businesses – from salary surveys to databases, to feasibility studies, to training. For a brief period, he was the Consulting Editor of Avenues – the careers supplement of ‘The Pioneer’ newspaper.

In 1997, Info Edge launched Naukri.com and transformed itself into an Internet company. Starting off from a servant quarter above a garage and with seed capital of two thousand rupees, the company grew and attracted investment from leading venture capitalists. It was the first Internet company to list on Indian stock exchanges. Today Info Edge employs over 4000 people and has a market capitalization of over USD 4 billion.

Sanjeev is active in various industry forums and is a contributor to the entrepreneurship ecosystem. He has served as the President of the Delhi chapter of TiE [The Indus Entrepreneurs]. He has also served as a member of the Global Board of Trustees of TiE.
He serves as a Member of the Council of Management of All India Management Association.
He has been Chair of the Internet Council of NASSCOM. He has also served on the Venture Capital Investment Committee for the SIDBI Fund of Funds for startups. Sanjeev is a member of the Board of the CIIE Initiatives at IIM Ahmedabad.

Apart from this, Sanjeev is also engaged in philanthropy. He is a founding trustee of Ashoka University. He is a member of the Board of Chintan – a not for profit organization that works with waste pickers in Delhi. He supports 1947PartitionArchive – a not for profit that is building an oral history archive consisting of video interviews of people who experienced partition. He also supports several other non-profit organisations.

He received the “Ernst and Young – Entrepreneur of the Year” award in 2008 for Business Transformation. Sanjeev also won the Dataquest Pathbreaker Award & the Teacher’s Achievement Award for Business in the same year. In 2011, he was conferred the Distinguished Alumnus award by IIM Ahmedabad and in 2012 he was honoured with the CF Andrews Distinguished Alumnus award by St. Stephen’s College. He is the recipient of the Lakshmipat Singhania – IIM Lucknow National Leadership Award, as Young Leader in the Business Category for the year 2012. In April 2017, Outlook Magazine selected him as one of India’s fifty greatest CEOs ever. Recently in 2019, he was honoured with the Lifetime Achievement Award in IT given by the Financial Express.

Co-Founder and CEO, Bigbasket.com
Hari Menon is the CEO of Bigbasket.com, a company he co-founded in December 2011 with a vision of setting up India’s finest online food and grocery company. With 45,000 products and 1,000+ brands delivered across 26 Indian cities, the key to Bigbasket’s success lies in their deep understanding of the grocery and perishables supply chain, working closely with 15,000 farmers, combined with technology and customer service-driven innovation. Bigbasket delivers 3,50,000+ orders per day, has a team of 25,000 people and a base of 12 million customers.

Hari Menon graduated from BITS Pilani in 1983. He started his career with ORG Systems, subsequently moving on to work with TVS Electronics, Wipro Infotech, Planetasia.com and Integrated Data Systems. He was also the CEO of ‘Indiaskills’ – the Vocational Education joint venture between Manipal Education Group and City & Guilds (UK). Hari’s entrepreneurial journey began in 1999 when he co-founded Fabmart, one of the pioneers in e-commerce in India and its physical extension – Fabmall, a chain of grocery stores in South India, which was acquired by Aditya Birla Group in 2006 and renamed ‘More’.

Hari and his company are recipients of prominent awards, including Consumer Internet Company of the Year by VC Circle Awards 2016; Ranked 4th by YourStory in the Top 100 Indian startups with gravity defying momentum in 2015; Best Startup of the year in 2014 by Bangalore Management Association; Best Online Grocer at the Coca Cola Golden Spoon Awards 2016; First runner up (Silver) at the Global eCommerce Summit Awards held in Barcelona; Best Retail and eCommerce App of the Year at the AWS Mobility Awards 2017; Rated the Top Brand in the Forrester’s India Customer Experience Index 2016. Bigbasket was awarded Startup of the Year at the Business Standard Annual Awards 2019. To his independent credit, Hari has been awarded for entrepreneurship by the Indira Group of Institutions; AUDI-RITZ ICON AWARDS from RITZ lifestyle magazine in the category of Entrepreneurship and “Champion of Tomorrow” by CEO INDIA Magazine.