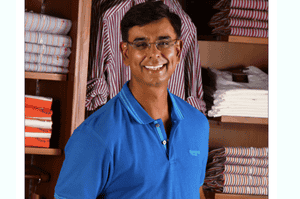 Venky Rajagopal born in a family of Civil Servants, is a first-generation entrepreneur. He did his post-graduation in Economics and joined the civil services as an IPS Officer in the year 1979. He served for 10 years and resigned in 1988. He started his entrepreneurial journey in 1989, with Celebrity Fashions, and in the year 2000 started Indian Terrain. He took both companies public, Celebrity in 2006 and Indian Terrain in 2011. Between them, the two companies have a turnover of 1,250 crores.

He is also a keen cyclist, and in 2016 he participated in the Tour of Nilgiris, cycling endurance event, covering 1,000 km over 8 days. Also, a passionate golfer, he has played the game for 20 years now.