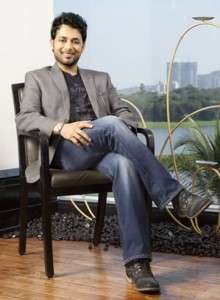 Anupam started his entrepreneurial journey by founding People Group, which includes businesses such as Shaadi.com, Makaan.com, Mauj Mobile and People Pictures. Known for his sharp business acumen and an eye for detail, Anupam has led People Group from one milestone to another and today the group is recognized as one of the most innovative enterprises in the country. Shaadi.com – the world’s largest matrimonial service provider was launched in the year 1996. With more than 30 million members and 3.2 million success stories to its credit, Shaadi.com has emerged as the premier matchmaking brand on the Internet, and the first business of its kind across the world. Similarly, Makaan.com – India’s fastest growing online real estate portal, and Mauj Mobile – India’s top mobile media company have been founded by Anupam and have quickly grown to become recognized names in their respective segments. Besides his operational roles, Anupam is also an active angel investor with over 40 investments to-date. He is passionate about entrepreneurship & innovation and is well regarded for his understanding and views of the same. Anupam is a founding member & past chairman of the Internet & Mobile Association of India (IAMAI) and the founding Co-chair of H2 India. Anupam Mittal has been voted by Business Week as one of India’s 50 Most Powerful People and has been on the list of one of the 25 people to watch out for by ‘The Week’ Magazine. IMPACT Digital Power 100 list 2012 & 2013 voted Anupam Mittal amongst top Icons of India’s Digital Ecosystem. To follow his views: Tweet him: @AnupamMittal Read his Blog at: AnupamMittal.com
I'm Interested