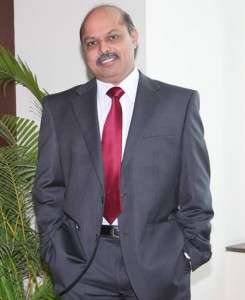 M. S. Unnikrishnan (52) is the Managing Director & CEO of Thermax Group, the Rs. 6000 crore energy and environment solutions company, headquartered in Pune, India. The company has a global presence and operates in the areas of heating, cooling, power, water and waste management, air pollution control and chemicals.

Mr. Unnikrishnan is the current Chairman of CII’s National Committee for Capital Goods and is also a Member of the sub-committee set up by the Planning Commission of India for preparing the technology development path for country. He is a Member of the Development Council constituted by the Ministry of Heavy Industries, Government of India, to create strategies for the industrial development of the country.  He is also a Member of the Apex Council to implement the ‘Prime Minister’s Fellowship Scheme for Doctoral Research’, a joint initiative from the government and industry to encourage industrial research and nurture talent

He co-chairs the National Committee for Capital goods of FICCI, and is a Member of the Executive Committee of Mahratta Chamber of Commerce, Industries & Agriculture (MCCIA). He also served as a Member of the special Sub-committee created by the CII for enabling the Civilian Nuclear Agreement between India and USA.

Mr. Unnikrishnan has been honoured with the ‘Asia Innovator Award’ at the 11th CNBC Asia Business Leaders Awards, held in Banghok in November 2012. He was awarded “for his inventive thinking in business and his leadership in an organization that has innovation at its core”.

Mr. Unnikrishnan began his career with Thermax after graduating from the Regional Engineering College, Nagpur in 1982 in Mechanical engineering. He has also completed his Advanced Management Programme from the Harvard Business School, USA.

Joining Thermax as a graduate trainee, he went on to establish the marketing set up for the Energy division of Thermax in the Western Region.

From 1987 and 1997, Mr. Unnikrishnan worked with EID Parry as the Head of Engineering Division and with Terrazzo Inc, U.A.E. as AGM heading the manufacturing, marketing and commercial operations.

After rejoining Thermax as General Manager in 1997, he became a member of the Executive Council in 2000. He also led the company’s project business as Group Business Head before being elevated as the Managing Director & CEO in 2007.

Mr. Unnikrishnan is known for his strategic and human relations skills and is a champion of green technologies.