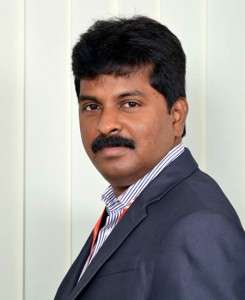 The founder-CEO of BharatMatrimony is among the early tech entrepreneurs of India who has helped millions of people experience the joy and love of matrimony using the power of the Internet. From a one-man show, Murugavel has built his flagship into the most successful matrimony brand in the world, making a positive lasting difference to the lives of millions in several countries. Murugavel’s inspiring achievements and success in the Internet space has won him several important awards and honours. He was honoured by the Asian Indian Chamber of Commerce as one of the Top 5 Asian Indian Businessmen in the United States below the age of 35. Murugavel was also recognized by the India Today Group as the “Business Icon of the Year” and given the “Udhyog Rattan” Award by the Institute of Economic Studies, New Delhi, for his achievements in quality, innovation and management in the online business. Recently, he was awarded the CII-Connect Award by the Confederation of Indian Industry for playing a significant role at the global level in the ICT sector. Murugavel was voted the ‘Digital Entrepreneur Of The Year’ at the WAT Awards in January 2012. A post-graduate in computer science from the University of Madras, Murugavel started his career with a software company in Chennai. He worked as a consultant in Singapore and the US for leading companies before setting up a small website that would become the world’s largest matrimony service. Murugavel is also committed to multiple social causes, from helping save lives to saving the environment. He champions the cause of eye donations and runs Bharat Eye Bank. Yet another initiative is BharatBloodBank, an online non-profit initiative started to promote blood donations across cities in India. Bharat Green Hands is a social initiative aimed at restoring environmental damage. Ability Matrimony is an exclusive matrimony site for singles with special needs or those wanting to marry someone with special needs. Murugavel is also passionate about mentorship and training early entrepreneurs to get started in the right direction.
I'm Interested