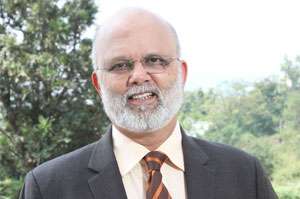 Pramod Chaudhari is the Executive Chairman of Praj Industries, a global Bioenergy, Renewable Chemicals and Environmental Technologies Company, with references across five continents.

Pramod is a ‘Distinguished Alumnus of IIT Bombay (1971)’ and an alumnus of Harvard Business School (AMP 1995).

As Founder of Praj (year 1984), Pramod has always sought challenging opportunities. He is committed to innovative solutions in the pursuit of clean and green technologies for sustainable environment and business.

He strongly believes in ‘Triple Bottom Line’ as a guiding principle for business. While practising this, he devotes considerable time in understanding this phenomenon, its impact on businesses and the society as a whole.

Pramod is a great lover of entrepreneurship and intrapreneurship development. He has instituted a special award called the ‘Symbiosis Praj Maha-Intrapreneur Award’ which recognizes organizational entrepreneurs.

• Pramod is the Past Chairman of CII – Pune Zonal Council and the Past Chairman of CII – Maharashtra State Council.
2) Member of World Council on Industrial Biotechnology (WCIB) promoted by WEF and BIO.
3) Member of Executive Council of Association of Biotechnology Led Enterprises (ABLE) in India for second consecutive term (2012-15).
4) In addition to above, he is :
• Member of the Board of Entrepreneurship Development Center (promoted by NCL).
• Member of Governing Board of SINE (Society for Innovation and Entrepreneurship), IIT Bombay.
• Founder Trustee of Pune International Center (PIC).
• Founder Member of Indian Federation of Green Energy (GREENFED) under Chairmanship of Shri Suresh Prabhu, Hon’ble Minister of Railways, Govt of India
• Founder Member of Inter Institutional Inclusive Innovations Center (i4c)
• Member on the Advisory Boards of reputed academic institutes of Engineering, Technology and Management. Strongly promoting Industry – Academia interaction, leading to Innovation and Entrepreneurship.

 Pramod co-authored a book ‘As Is what Is’, a story of the journey of Praj. He is the recipient of many awards for entrepreneurship and excellence.
 He has been profiled in the books— ‘Thought Leaders’, ‘Path Breakers’ and ‘Khare Khure (True) Idols – II’ by leading publishing houses. These books focus on visionary entrepreneurs.
 He has been actively contributing on various Climate Change forums including that of UN Leadership Forum on Climate Change.
 He was one of the finalists selected for Platts Global Energy Awards 2014.

Praj is a global process solutions company driven by innovation and integration capabilities, offers solutions to add significant value to Bio-Ethanol facilities, Brewery plants, Water & Wastewater treatment systems, Critical Process Equipment & Systems, High Purity solutions and Bioproducts. Over the past 3 decades, Praj has focused on environment, energy and agri process led applications. Praj has been a trusted partner for process engineering, plant & critical equipment and systems with over 600 references across five continents. Solutions offered by Praj are backed by its state of the art R&D Center called Matrix. Led by an accomplished and caring leadership, Praj is a socially responsible corporate citizen. Praj is listed on the Bombay and National Stock Exchanges of India.

Praj has been accorded recognition at different national and international fora including the ‘Forbes Best Under a Billion Asian Company’ (in two consecutive years i.e. for 2007 and 2008), Best Performing SME by Outlook Money and Business Standard for 2006-07, Bio-Excellence Award by Government of Karnataka in the category of Industrial Bio-tech Sector consecutively for three years.

Praj is listed on the Bombay and National Stock Exchanges of India with marquee investors. Praj Group turnover is around INR. 10 Billion. For more information, visit www.praj.net