You are here: Home / speakersnew Sanjay is the Chief Innovation Officer at CIIE, where he leads efforts to help promote, and encourage entrepreneurship in areas around digital technology.Sanjay Jain is also a volunteer with iSPIRT, the software product industry think tank. He has been one of the key contributors to help create, and evangelize various government open APIs, which are collectively referred to as the India Stack. During his career, Sanjay has been responsible for the development of many large scale, high impact systems. He was the Chief Product Manager at the UIDAI. Earlier, he helped create and launch Google Map Maker, a crowd-sourced mapping product that helped to build Google Maps data for 170+ countries (including India).Sanjay holds an M.S. in Computer Science, from the University of California, Los Angeles and a B.Tech in Computer Science & Engineering, from the Indian Institute of Technology, Mumbai. 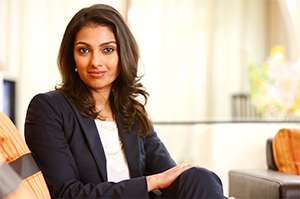 Ms. Ameera Shah, Promoter & Managing Director of Metropolis Healthcare Ltd. has evolved Metropolis from its single pathology laboratory status to being India’s leading fully integrated and only multinational chain of 150 diagnostic centers and 1000 collection centers across the globe. Ms. Shah is an eminent industry spokesperson and has been featured as a speaker in various National and International forums, industry events and conclaves. She has been a key-speaker at prestigious events organized by IIM- Ahmedabad, Harvard Business School, TedX, CII and many others. An International & National award winner, She was conferred with ‘The Young entrepreneur of the Year Award’ by GE in 2006, ‘Young Entrepreneur of the Year Award’ in 2011 organized by Entrepreneur India and Bloomberg. She has been honored with ‘Exemplary Women Leadership award’ at the World Women Leadership and Congress awards 2014. Recently Forbes Asia listed Ms. Shah in the Asia’s Most Powerful Women 2015 for powering the rise of Metropolis Healthcare and brining a significant shift in the diagnostics industry.

Mr AlurSeelin Kiran Kumar, Distinguished Scientist (Apex) and Director, Space Applications Centre, Ahmedabad, assumed the office of the Secretary, Department of Space, Chairman, Space Commission and Chairman, Indian Space Research Organisation (ISRO) on January 14, 2015. Mr Kiran Kumar is a highly accomplished space scientist and engineer with a distinguished career spanning over four decades in ISRO in the satellite payload and applications domains. He has made immense contributions to the design and development of Electro-Optical Imaging Sensors for Airborne, Low Earth Orbit and Geostationary Orbit satellites starting from Bhaskara TV payload to the Mars Orbiter Mission payloads. Mr Kiran Kumar was instrumental in evolving the successful strategy for steering the Mars Orbiter Spacecraft towards planet Mars as well as its Mars Orbit Insertion. He has also made significant contributions for evolving the observation strategy encompassing land, ocean, atmospheric and planetary studies. Mr Kiran Kumar is an alumnus of National College, the esteemed educational institution of Bangalore. He obtained his Physics (Honours) Degree from Bangalore University in 1971 and later obtained his Master’s degree in Electronics from the same university in 1973, and thereafter his M.Tech Degree in Physical Engineering from the Indian Institute of Science, Bangalore in 1975. Mr Kiran Kumar began his career in ISRO by joining Space Applications Centre (SAC) in 1975. Later, he became its Associate Director and in March 2012 took over as the Director of SAC. At SAC, Mr Kiran Kumar has been steering the design, development &realisation of payloads and application activities of earth observation, communication, navigation, space science and planetary exploration. Mr Kiran Kumar is a recipient of many national and international laurels/awards including the Padma Shri Award conferred by the President of India in 2014, International Academy of Astronautics’ Laurels for Team Achievement Award for Cartosat in 2008 and for Chandrayaan-1 in 2013, Indian Society of Remote Sensing (ISRS) Award for the year 1994, VASVIK award (Electronic sciences and technology) for the year 1998, Astronautical Society of India Award (Space Sciences and Applications) for the year 2001, ISRO individual Service Award 2006, Bhaskara Award of ISRS in 2007 and ISRO Performance Excellence Award 2008. He is a Fellow of professional institutions like Indian National Academy of Engineering, Indian Society of Remote Sensing, Institution of Electronics & Telecommunication Engineer, and Indian Meteorological Society. Besides, he is a member of the International Academy of Astronautics. Mr Kiran Kumar has represented ISRO in international forums like World Meteorological Organisation (WMO), Committee on Earth Observation Satellites (CEOS) and Indo-US Joint Working Group on Civil Space Cooperation.
I'm Interested