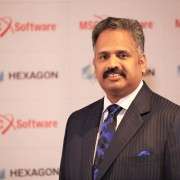 Executive VP and MD, Hexagon Manufacturing Intelligence, India Sridhar Dharmarajan is Executive Vice President and Managing Director, Hexagon Manufacturing Intelligence India and MSC Software, Indo-Pacific. In his role, Sridhar is responsible for the India sales operations for the Metrology and Production Software portfolios, as well as MSC Software and Q-DAS. He also oversees the MSC Software Indo-Pacific regional business operations across India, ASEAN, Australia and New Zealand. He joined MSC in 2007, establishing the company’s first sales office in the region. Over the past decade, he has built and retained high-performing teams and has been responsible for the company’s market leadership and 10x growth. Before MSC Software Corporation, Sridhar was responsible for successfully setting up the MatrixOne operations in India between 2002 and 2006. Between 2000 and 2002, he was a successful entrepreneur who set up two companies — Bluefont Technologies and Pixtel Communications; Pixtel being sold to Mindtek of Taiwan. It is during this time that Sridhar acquired an in-depth knowledge of setting up and running a software company end-to-end. He started his career with Wipro Infotech. After Wipro, he was handpicked to be a part of a core team to establish SDRC (now Siemens PLM) in India at the beginning of 1992. During his eight-year tenure at SDRC, he was the recipient of numerous technical and sales excellence awards and played a vital role in the success of SDRC in the country. Sridhar completed his MS in Mechanical Engineering from the Indian Institute of Science Bangalore and Diploma in Business Management, Finance from ICFAI. He has successfully completed many courses conducted by Harvard University, Boston, and at IIM Ahmedabad. He is based in Bangalore and calls the garden city his home.
0 replies